On Thursday, United Way released a report that I authored called Overcoming the Odds which focuses on the issue of Child and Youth Poverty in Windsor-Essex County and the barrier that prevent these young people reaching their potential. I was on CBC News Windsor (at 13 minute mark)  as well as the CBC Afternoon Drive radio program (audio not available at this time) speaking about the report and United Way’s Work on this issue. 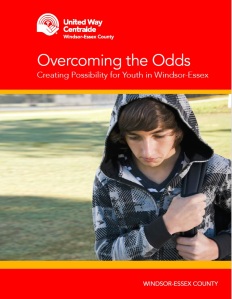 Report in a summary: